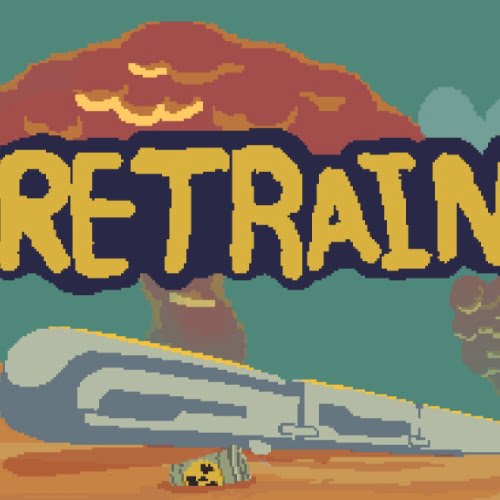 Re-train is a game about a possible future we hope to avoid. It shows a world where nuclear wars laid waste to our earth, and the humans’ last were all too late, efforts to save themselves and all other life forms on the planet.

Necessity is the mother of invention, so the remaining humans put everything they have in researching ways to clean up the nuclear waste covering most of earth before it snuffs out all remaining life. They weren’t able to to find a solution, but they were able to do the next best thing… delay the problem. They were able to figure out the secrets of time travel and planned to ship the waste to the future where hopefully someone in the intervening time was able to find a way to deal with all the nuclear waste. A time Machine in the shape of a train was built and it’s first voyage was about to begin…

Retrain is an endless survival/management game. The main game-play loop is that you have to manage the cargo and machinery on the train until it can get up to a speed of 88 mph. at which point time traveling becomes possible. So the game is a series of journeys to the future, where machinery may break and you have to go to the right cabin and fix it before the system fails completely and the nuclear waste is compromised. The difficulty rises as you get more upgrades to the train and can carry more nuclear waste for each journey. In the end it’s a game with a dark theme so your goal is to survive as long as possible and ship as much nuclear waste to the future as you can before your character dies, Which is an inevitable and unavoidable end. But maybe your sacrifice can save humanity?